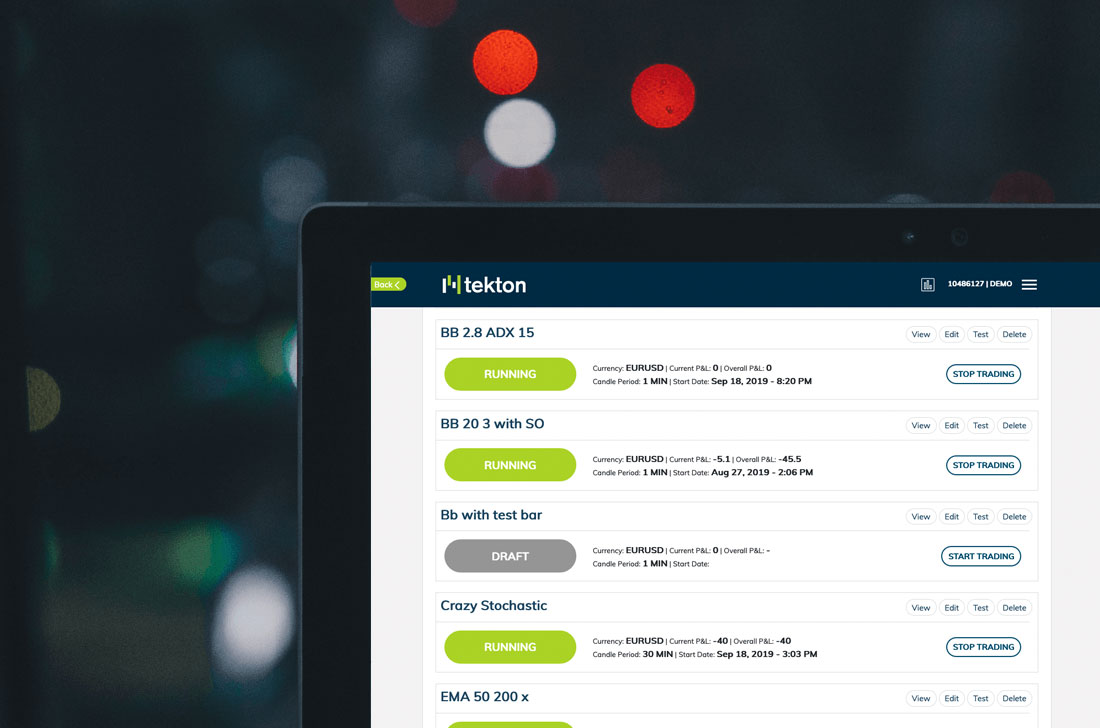 by Team Tekton
in Articles, Trading with Tekton
Comments

Your plan is your discipline, right?

It’s true. The best traders stay disciplined by sticking to their trading plans.

Trading by plan lets you know when to get into a trade and when to get out. (It isn’t an angel’s voice whispering in your ear every time you’re about to get greedy, friends. It’s the plan.)

If you’ve got a plan, it’s easier to stay objective and avoid revenge trading if things go south, as they will from time to time. And you’ll keep your mind focused and decluttered. No emotion allowed when you’re trading, remember? (Unless you’ve just won a trade and it’s party time.)

The best traders stay disciplined by sticking to their trading plans.

The end result of all that planning and control?

Traders who live by the plan have the focus to minimize losses and maximize profits. That’s because they’ve figured out that managing their money isn’t a game of risk, but a philosophy of discipline they can have a degree of control over.

Actually, your algos are your plan

Now I want you to take all of what I said above and imagine being able to make the most disciplined trades you’ve ever made simply by not doing anything at all.

Worried you’ll bite off more than you can chew? Tekton will fix your lot size for you before you go into a trade, so you’ll never run in there like Leeroy Jenkins to mess with it halfway through just because you’ve got that “lucky” feeling again.

It isn’t always easy to stop. That’s why when you run a Tekton algo, all your trade orders have a stop loss, which means that you can’t wipe out your account even if you wanted to. Plus, when a new lead does come through, you’ll have the money in your account to chase it.

Forget about being disciplined and imagine, instead, being able to make the most disciplined trades you’ve ever made simply by not doing anything at all.

Afraid you’re going to get greedy? No problem. Just Tell Tekton to lower your take profit settings before you go into a trade. You’ll never run with a trade so far it turns against you again.

Not every strategy is a winner. When you set your strategy drawdown with smart algotrading software like Tekton, you make sure that even if your strategy doesn’t work like you planned, it doesn’t burn out your account. Once that drawdown is reached, you’re done.

Testing is the key to making successful trades. With Tekton’s unlimited backtesting feature, you can test any algo you want to see how it would have performed in the past, as many times as you want. Even if past results are no guarantee of future performance, going into a trade informed is a lot better than running in blindly.

But that’s not the best part

No one likes surprises on the trading floor, but we figured you’d like this one. Tekton is free, it’s super easy to learn and you don’t have to know any coding at all to become a pro algotrader. Plus, joining the Tekton team can actually win you rewards.

Here’s how it works.

If Tekton completely changes your algotrading game—and it will—and you refer us to your friends and fellow traders, you’ll earn a commission on every trade they make using Tekton.

If you're looking for answers about Tekton, check out our FAQs.

Download our step-by-step guide on how to use Tekton.